There is a plethora of research on self-esteem and body image in relation to women’s self-worth residing in their physical appearance (Barker & Galambos, 2003; Breines et al., 2008; Clay et al., 2005; John & Ebbeck, 2008; Overstreet & Quinn, 2012; Paxton et al., 2006; Rothblum et al., 1988). Typically, the ideal for women is to be particularly thin. This is not only seen as the preferred body shape connected to attractiveness and self-worth in Western cultures, it is viewed as a reflection of a woman’s youth and self-control (Bordo, 1993; Grogan, 2017). Body dissatisfaction is prevalent among sports that require the athletes to maintain a low body weight and/or low body fat percentages in order to be successful. Competitive physique competitions require the athletes to obtain an excessive degree of leanness, consequently increasing the susceptibility for these athletes to develop unhealthy habits for weight control and supplement usage.  (Goldhead, 2009; Whitehead et al., 2020). Thus, as one’s body image improves, self-esteem would increase as well. The literature reflects this connection, indicating that body satisfaction and self-esteem are positively correlated (Dorak, 2011; Lobera & Ríos, 2011; Mäkinen et al., 2012).

One cultural phenomenon that has grown in recognition during the last few decades is the rise of women’s physique competition, which focuses on the degree of muscularity, percentages of body fat and muscularity shape and symmetry of women’s bodies. There are several categories for women in physique competitions; each category has different guidelines regarding muscularity and conditioning for athletes. The duration of training for such competitions ranges 8 – 20 weeks. Competitors are judged by a subjective rating scale and are ranked in order of preference according to judging criteria related to physical appearance. In contrast to men’s bodybuilding, the judging criteria for female physique competitors requires a certain degree of muscularity and low body fat while still maintaining a feminine appearance including skin tone, hair, makeup etc.  (Boyle, 2005).

With this hyper focus on changing and manipulating their appearance, it would follow that, for women participating in physique competitions, perceptions and attitudes about their bodies, especially their appearance, would be affected by their training results. (Krane et al., 2001; Stapleton et al., 2017; Suffolk, 2014). It would also follow that they would be particularly susceptible to self-esteem fluctuation dependent on body image given a preoccupation with their appearance and constant body surveillance.

There is research indicating that self-compassion can mediate one’s level of body-image-dependent self-esteem (Ferreira et al., 2013; Stapleton et al., 2017). Neff (2003), one of the premier researchers on self-compassion, notes that self-compassion is more than the absence of self-judgment. It incorporates self-kindness (the offering to oneself a gentleness and acceptance), a sense of humanity (the belief that no one is perfect and that everyone makes mistakes) and mindfulness (the ability to recognize but not exaggerate one’s painful thoughts and emotions). In their 2016 article, Warren, Smeets and Neff found that “self-compassion seems to buffer against body-image concerns. It is associated with less body dissatisfaction, body preoccupation, and weight worries, (and) greater body appreciation” (p.21). Thus, this study aims to answer the question of whether self-esteem and body satisfaction are positively correlated for women who participate in bodybuilding training and competition, and if self-compassion is a mediating factor in the relationship between self-esteem and body satisfaction.

The participants were females between 18 and 60 years of age, of diverse ethnic backgrounds who actively compete in fitness, figure, and bikini categories of physique competitions, and who volunteered to participate in the study. Requests for participation were distributed through personal contact and word of mouth. All participants were training with the same trainer (in person and remotely) in the US and internationally. The participants needed to be able to access a computer to complete the surveys online, be able to read and speak English as a first language and volunteer without incentive.

This study had a non-experimental design that consisted of different independent variables and criterion variables per hypothesis. The self-compassion, self-esteem and body satisfaction variables were scored on the Self-Compassion Scale, Rosenberg Self-Esteem Scale and the MBSRQ-AS Body Image Scale, respectively.

In order to minimize the risks, instructions for the survey and the information letter both included the option for participants to discontinue taking the survey at any time. Participants were asked to create a codename at the beginning of the questionnaire in order to preserve anonymity. Participants were instructed to answer this anonymous survey on their own computer and not their employer’s, to maintain confidentiality. In addition, these measurements did not involve questions of any significantly embarrassing nature.

The first observation sought to observe a potential correlation between self-esteem and body satisfaction in women who participate in physique competitions, where it was hypothesized that there would be a positive correlation between the two. Using simple linear regression, body satisfaction ratings (averaged across the three assessments for each participant) were regressed on self-esteem scores (averaged across the three assessments for each participant). This regression was not found to be statistically significant at the 95% confidence level. We did not find evidence to support the claim that self-esteem can predict body satisfaction for women in physique competitions.

The goal of this exploratory study was to increase the understanding of factors that lead to fluctuations in self-esteem and body satisfaction in women who compete in physique competitions and explore whether the findings supported by the work of both Wasylkiw et al. (2012) and Stapleton et al. (2017) would be replicated: that self-compassion could be a partial mediating factor in body image and self-esteem issues in women who compete in physique competitions.

We suggest that our results for hypotheses 1 and 2 may be a function of our participants’ requirement to be hyper-focused on their appearance. The fact that these women were training for and were going to be judged in a physique competition requires them to perform constant body surveillance. This preoccupation with their fat-to-muscle ratio, strength, definition, etc., requires that they consistently look for areas of improvement and may disallow their ability to feel good about themselves at any point during their training or afterward. 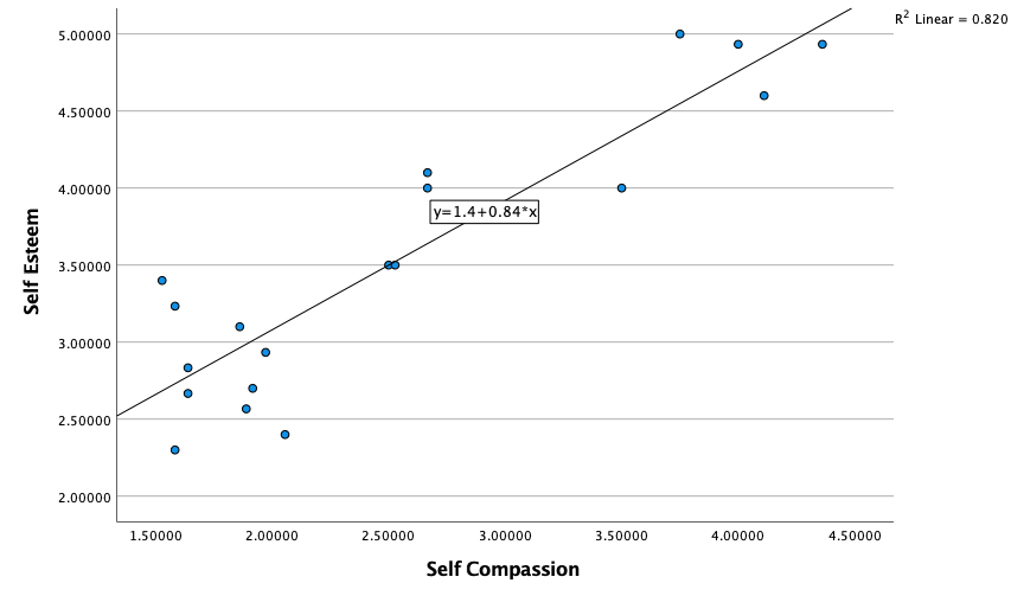 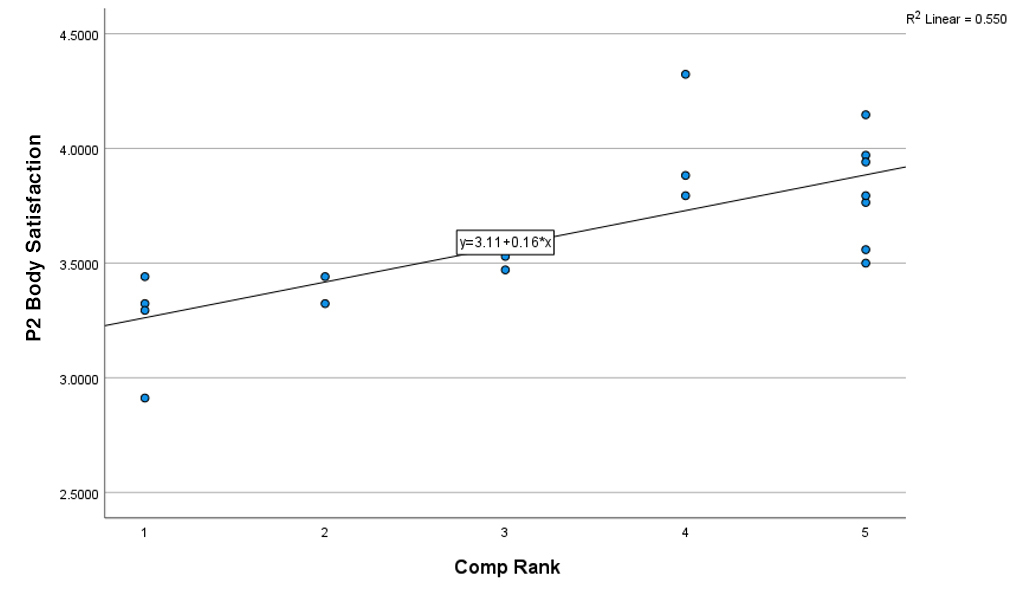 Given the dearth of information on women who participate in physique competition, there is a need to understand more about women investing in this sport, how their participation affects their sense of self, and their experience of how they see themselves as women and athletes. More data would assist health and training professionals in their work with individuals involved in bodybuilding to better navigate the pressures and consequences of intensive body focus and training by working to increase self-compassion.

Dr. Tracey Greenwood has been at Eastern University for 15 years where she is an Associate Professor as well as the Department Chair of Kinesiology and the Program Director for Exercise Science. She earned her M.S. From St. Joseph’s University and her Ph.D. from Temple University. She is also actively working in the clinical field of exercise science.

Dr. Yolanda (Landi) Turner is the former co-chair of the psychology department at Eastern University, where she was an associate professor for 30 years. In addition, she recently retired from her work as a psychotherapist and partner at Central Counseling Associates. Dr. Turner received her M.A. from Hahnemann Medical University and her Ph.D. in human sexuality from Widener University.

Warren, R., Smeets, E., & Neff, K. (2016). Self-criticism and self-compassion: risk and resilience: being compassionate to oneself is associated with emotional resilience and psychological well-being. Current Psychiatry, 15(12), 18-32.